To share your memory on the wall of Erwin Hahn, sign in using one of the following options:


It is with great sadness we announce the passing of Erwin Edwin Hahn of Melville, Saskatchewan, who passed away peacefully with his family by his side on Monday, July 5, 2021, at the age of 63 years.

Erv was born to George and Pauline Hahn on February 22, 1958 in Melville. He grew up on the family farm north of Melville. Farming was a part of his life at an early age after the passing of his father.

In 1983, Erv met Laurie (nee Grainger), and they were married in 1984. Erv and Laurie enjoyed 38 years together, raising three children, Carrie, Terra and Dylan. When their grandson, Jayden, was born, Erv looked forward to spending time with him.

Erv enjoyed farming, snowmobiling, lake life, fishing, especially with Dylan and Jayden,and, in the last couple years, growing his garden. He also enjoyed going on well-earned winter vacations, Cuba being his favourite. Erv was a long-time member of the Melville ShowStoppers Snowmobile club and supporter of the Melville Millionaires Agri-Fund Project. He enjoyed his family, friends, reminiscing, sitting around a good bonfire with his fire poker and a good laugh. You could always find him spoiling his four-legged companions, Duke and Baus, who were always by his side.

Erv was predeceased by his parents, George and Pauline Hahn, four sisters and two brothers, as well as numerous family members. He will be lovingly remembered by his wife, Laurie; three children, Carrie, Terra and Dylan and grandson Jayden: sisters Betty Ann, Erna, Dorothea, Freda, Bertha, brother Peter and their families; and extended family and many, many friends.
Read Less

Donations are being accepted for:
Rail City Industries Diabetes Canada

We encourage you to share your most beloved memories of Erwin here, so that the family and other loved ones can always see it. You can upload cherished photographs, or share your favorite stories, and can even comment on those shared by others.

Mark and Michele Ferguson sent flowers to the family of Erwin Hahn.
Show you care by sending flowers

Posted Jul 16, 2021 at 08:17pm
Laurie, Carrie, Terra, Dylan and Jayden. So sorry for your great loss. Erv was such an important person to our family and our farm. There is going to be such a void in spring and fall not seeing Erv in the yard, always with a smile on his face.
Comment Share
Share via:
R

Posted Jul 16, 2021 at 12:07pm
Laurie, Carrie, Terra, Dylan and Jayden. We are so sorry for your loss of a great person. Working with Erv was a highlight for me every spring and fall. It also became a great friendship. We will truly miss his presence here especially his Sunday evening crop tours and his coffee visits here at the farm. Jan and Ron.
Comment Share
Share via:
GN

Posted Jul 16, 2021 at 11:35am
Dear Laurie, Carrie, Terra and Dylan,
We are so sorry for your loss. Erv was a great farming partner, friend and someone you knew would always be there to help out if needed. He will be deeply missed around our family farm.
Heartfelt condolences, Greg, Courtney, Alya and Ivy Niebergall
Comment Share
Share via:
DM

Posted Jul 14, 2021 at 03:21pm
Laurie and Family. My sincere condolences in your great loss of Erwin. My thoughts and prayers are with you all.
Comment Share
Share via:
OR 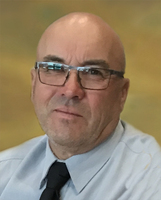