In Memory of
Herbert
Waldbauer
1926 - 2022
Click above to light a memorial candle.
Memorial Candle Tribute From
Frontrunner Professional
"The lighting of a Memorial Candle allows visitors to leave a symbolic gesture of"
View full message >>>
Send Flowers
Menu

In the event that there is an error
in the information presented,
please contact the funeral
home by clicking here. 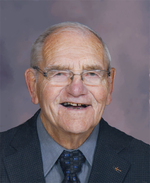 
It is with heavy hearts we announce the sudden passing of Herbert Waldbauer, beloved husband, father, grandfather, great-grandfather and friend to many, on Tuesday, June 14, 2022.

Herbert was born August 18, 1926, to Gottfried and Karoline (Markwart) Waldbauer on the family farm in the Killaly district. He was baptized and confirmed at St. John’s Lutheran Church in Killaly. Herbert received his grade school education in the Wallacetown School in the district. He quit school at age 15 to help out on the family farm.

On April 18, 1949, Herbert was united in marriage with Elsie Schick, the love of his life, at St. Paul’s Lutheran Church in Melville. This union was blessed with three daughters and three sons.

In April 1950, Herbert became employed with the CNR at the equipment department in Melville. During his 36-year career, he became a well-respected and knowledgeable member of several specialty departments. He was a member of the CN Fire Department, CN Emergency Response team on dangerous commodities, on the Melville CN Auxiliary clearing tracks after derailments, submitting time and progress reports, crane operator on rail and road rail crane. He worked as a welder, an air brakes mechanic, ARR biller submitting time and repair reports for CN and foreign repair reports. He submitted numerous suggestions to CN for safety, time and money-saving ideas, for which he received some substantial monetary awards and recognition. Herbert was also a member of St. Paul’s Lutheran Church Council, attending many Saskatchewan Synod and Yorkton Conference conventions. He volunteered for CRA, assisting low-income seniors with submitting their income tax.

Herbert retired in 1986 and enjoyed many years with family and friends at the cabin at Crooked Lake. He also loved being out on the lake fishing, hoping to catch a big one. He loved his family, and there was nothing that brought him greater joy than when they came for a visit.

In loving memory, Herbert is survived by his beloved wife of 73 years, Elsie; his six children, Darlene Warner, Rosemarie Yahnke (Elmer), Gail Skwark (Lloyd), Nelson Waldbauer (Lorraine), Sheldon Waldbauer (Annette) and Darrel Waldbauer (Sheila); 10 grandchildren; 17 great-grandchildren; and his only remaining sister, Christine Parachoniak. He was predeceased by his father and mother; sisters Mary and Helen; brothers Ernie, Gus, August and Wilfred; son-in-law William Warner; daughter-in-law Lori Waldbauer; as well as many other family and friends throughout the years.

The family would like to thank the staff at St. Peter’s Hospital for their care and compassion during his final hours. In lieu of flowers, donations can be made in his memory to St. Paul’s Lutheran Church, the Heart and Stroke Foundation or a charity of your choice.