To share your memory on the wall of Dwight Pawelko, sign in using one of the following options:


It is with deep sadness that we share with you the passing of Dwight Edward John Pawelko of Birmingham, SK, on Sunday, May 30, 2021, at the age of 50 years.

Dwight leaves behind to mourn his loss: his children, Jared and Jade; father Edward; sisters Bernadette (Vernon) Giesbrecht, Cecilia (Ray) Kessel and Angela (Kurt) Oehler, as well as his seven nieces and nephews, four great-nephews and one great-niece. He was predeceased by his mom, Johanna Pawelko (nee Augustine), and his grandson, Elliott Vallee-Pawelko.

Dwight had spent most of his adult years as a general labourer, working in areas that involved general construction, drywall and carpet installation. In 2008, he suffered from major burns to a majority of his left leg, resulting in him being unable to work.

Dwight took pride in keeping his yard looking great. Most summer days you could drive by and see him out somewhere in the yard on the lawn tractor. He enjoyed crosswords, gardening, bonfires and hanging out with his friends drinking a few beer.
Read Less

We encourage you to share your most beloved memories of Dwight here, so that the family and other loved ones can always see it. You can upload cherished photographs, or share your favorite stories, and can even comment on those shared by others.

Posted Jun 04, 2021 at 04:55pm
My sincere sympathies to my Uncle Ed and Bernadette, Cecelia, and Angela for the loss of a son/brother. As well to Dwight's children Jared and Jade for the loss of their Dad., and Jenn Johnson as well our extended family. It is one consolation that Dwight is no longer suffering and can now be rejoined with his beloved Mom and as well our Grandpa and Grandma I will always smile of the times since Dwight was small and he and my sister would at times get in a little trouble and then look so innocent and the times our families would have get togethers Dwight was always kind and respectful to me and I enjoyed his grin and the way he would adjust his glasses *with his middle finger of course that made me laugh* I visited him on his acerage a couple years ago for a couple hours We chatted, had some laughs me with my coffee and a cold one in Dwight's hand I told him he drank a good brand and he did the cheers thing. He showed me his bead work, I was impressed and ordered a necklace We discussed the touch lamp and that was between us ~I'd only gotten to talk with my cousin a couple more times but he knows I cared of him and still does. I hope he stirs it up a bit where he is today and he knows how much a lot of us cared/loved him regardless He lived his live as he wanted and he didn't need anyones approval. Dwight is at peace now, and he can still do whatever he wants.
My sorrow goes deeply to my Uncle Ed and he and the girls are in my thoughts, my heart and prayers. Bless U all dearly
Comment Share
Share via:
DC

Posted Jun 03, 2021 at 09:16pm
Always trying to get on his sisters nerves, especially when I was over. Lol !!
Congratulations to Ed and Family 🙏❤️
Comment Share
Share via:
FP

Posted Jun 02, 2021 at 11:43pm
Dear Jenn and Family
Our deepest sympathy to all of you! Treasure all the wonderful memories you made!
Comment Share
Share via:
LM

Condolences to everyone who know him 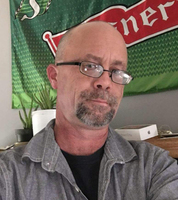