To share your memory on the wall of Wilfred Brule, sign in using one of the following options:


It is with saddened hearts that the family of Wilfred Brule announces his passing on Thursday, May 20, 2021, at the age of 65 years.

Wilf was born in Whitewood and raised on his family's farm, attended school in Whitewood and grew up playing all sports. Wilf was always a hard worker and gained lots of experience from his time on the farm, working at the mine, the Gulf Service Station, Whitewood Auction Barn and the Esso in Regina. He then attended SIAST to get his auto mechanics ticket with which he built a successful career as a mechanic for over 42 years.

Wilf married his one true love, Brenda, in 1977, and together they raised their two children, Tasha and Clayton, who were his main source of pride and true joy. He was a family man through and through; Brenda, Tasha, and Clayton were the centre of his world. He accepted their partners, Eddie, Jenna and Meagan, with open arms and a loving heart. He always made time and took interest in what his family and friends were up to, including his nieces and nephews and all the babies.

Wilf played fastball and slow pitch and curled for many years. Through his interest in sports, he inspired his kids to love sports as well. Over the years, Wilf gained a love of golf and truly enjoyed his vacation with Brenda to Phoenix. He had always been an avid hunter and fisherman, through which he was able to spend time with his family. Whether he was in the Pipestone, down by Cornach, at the lake, up at Tobin or all the way in Ontario, these are the times he appreciated so much.

In 2008, Wilf and Brenda purchased their cabin with Les and Shelley at Gremeau Park, now Black Pearl; this was their place, a home away from home. Since then, he and Brenda spent their weekends and holidays with family and friends, including their lake family, gathering around the fire. Wilf absolutely loved turning on his music, pouring himself a drink and spending time around the fire, telling jokes and reminiscing about his life and experiences. He was looking forward to spending his retirement years, especially this summer, down at the lake in his new home away from home. Wilf loved being around others and was a very social guy who could fit in with any crowd. He enjoyed all types of card games, horse racing and crokinole and was very tough to beat when it came to anything trivia.

Wilf was a very special man who would do anything for anyone. He was loved by all and will be forever missed but never forgotten.
Read Less

Donations are being accepted for:
Hospitals of Regina Foundation Charity of choice

We encourage you to share your most beloved memories of Wilfred here, so that the family and other loved ones can always see it. You can upload cherished photographs, or share your favorite stories, and can even comment on those shared by others.

Posted Jun 10, 2021 at 03:45pm
Brenda, Tasha & Clayton,
I am so sorry to hear about Wilf.
I have great memories of hanging out at your house in high school. And even when we were getting in trouble and he would call “TASHA” with a deep tone, he couldn’t hide his warm heart! His love for his family always showed.
My deepest sympathy.
Jody Dulmage (Walbaum)
Comment Share
Share via:
LZ

Posted May 29, 2021 at 04:31pm
Our deepest sympathy to Brenda Tasha and Clayton on the passing of Wilfred. He will be greatly missed by all who knew him. Wilfred was always such a happy guy with a big heart. I was so fortunate growing up with Wilfred and all my Brule cousins. We had many great family gathering together. . May he rest in peace and eternal light shine upon him. Take care and big hugs to all of you. Love Ed and Leona
Comment Share
Share via:
WR

Posted May 29, 2021 at 03:49pm
Wilf you played a big part of my life I considered you and Brenda Tasha as my second family I didn’t knock when I went to your house I just walked in because I was always welcomed there.and although I never got to say good bye I will always remember the good times the times you gave me advice and the great times we had playing cards and having a drink .most memorable for me was with Clayton Craig wilf and Brenda at the lake I know you would never forget that monster shark I caught that day it took while to reel in it was huge Well I thought it was Untell you made fun of me lol. Wilf your gone but will never be forgotten. Untell we meet again my friend. Cheers.
Comment Share
Share via:

Posted May 29, 2021 at 03:44pm
Dear Brenda Tasha Clayton and Family
Myron has great has " Great Memories of hockey days coaching Clayton &Craig .
We had great times with parents playiing cards and games and of coarse a few drinks.We consider him a friend.
He will be saadly missed by all.
Our deepest sympathy to all of you.
HUGS
Myron and Gloria Gettle
Comment Share
Share via:
B

Posted May 28, 2021 at 12:27pm
Brenda and family, our sincere condolences to each of you. Our paths crossed last summer as camp neighbours, but feel we’ve known you for years through the many Brule’s we do know. Such a close knit family, the sudden loss is felt deeply among many. Wilfred will be missed by so many and forgotten by none. He’s left his mark and his legacy of love, laughter and the importance of family and friends. May you find peace knowing he is at peace.
Bonnie & Terry Velestuk
Comment Share
Share via: 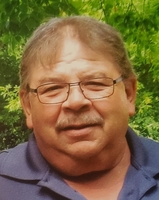 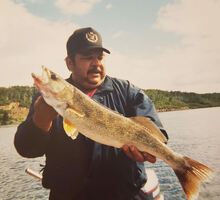