To share your memory on the wall of Barry Weishaupt, sign in using one of the following options:


It is with heavy hearts that we announce the passing of our brother, uncle and friend, Barry Weishaupt.

Barry was born in Birmingham, England, on February 5, 1944. He came to Canada with his mother at the age of 2 years in 1943. Barry was never married. He was a carpenter and redid the house he lived in with his mother until she passed on in 2015 at the age of 95 years. Barry was also predeceased by his father, Tony (Anthony), in 1975; brother Peter in 2005; and nephew-in-law Don Reed.

Barry enjoyed company in small numbers. He also enjoyed his morning coffee with his friends.

Donations are being accepted for:
THE KIDNEY FOUNDATION OF CANADA / LA FONDATION CANADIENNE DU REIN Charity of choice

We encourage you to share your most beloved memories of Barry here, so that the family and other loved ones can always see it. You can upload cherished photographs, or share your favorite stories, and can even comment on those shared by others. 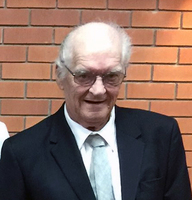