To share your memory on the wall of William Blyth, sign in using one of the following options:


It is with much sadness, but also with grateful hearts for a long and full life, that our family announces the passing of William (Bill) Henderson Blyth, late of Whitewood, SK, on Thursday, March 18, 2021, at the age of 95 years, with family at his side.

Bill was born in Wapella, SK, on May 5, 1925, to George and Ethel Blyth. He was the youngest of six children. Bill was raised on the farm and was involved with the operation of the farm from a very young age. After becoming engaged on Christmas Eve 1946, he married the love of his life, Doreen McPhee, on June 9, 1947. Bill and Doreen started their married life on the farm and continued to farm in the Parkin district for many years where they raised their four children. Life was good!

Bill had many interests. For 57 years, he was a faithful and active member of the Knights of Columbus. Bill was an avid ball player and enjoyed both playing and coaching ball. He enjoyed dancing, socializing, travelling, curling and playing billiards. Bill especially loved to play crib, and he didn’t mind skunking anyone willing to play against him. He was a gentle man and usually had a smile on his face but could be feisty when called for. He had a great sense of humour and enjoyed a good laugh.

Throughout his lifetime, Bill had numerous jobs including work with SaskPower, Whitewood Rural Telephone Company, Walter Reynold’s Electric and working as ‘maintenance engineer’ at the Whitewood Hospital. After the family moved to town, Bill never lost his love of farming and continued to farm a quarter section of land south of town. He had a very strong work ethic and could be found chopping wood for his fireplace, pushing snow with his beloved tractor for his neighbours or fixing a bike for his grandkids. But above all, Bill loved his family beyond measure. He was loved and was a blessing to all of us. He leaves a legacy of love to his children, his grandchildren, his great-grandchildren and his great-great-grandchild.

A private family graveside service will take place on Thursday, March 25, 2021, at the Whitewood Cemetery with the Rev. Father Tomy Mandapathil officiating.

We encourage you to share your most beloved memories of William here, so that the family and other loved ones can always see it. You can upload cherished photographs, or share your favorite stories, and can even comment on those shared by others.

Posted Mar 23, 2021 at 10:21am
To Allan, Donna, Brenda and Myrna and your Families my deepest sympathy. Your Dad and Grandpa was a sweet and loving man. Cherish the memories.
Comment Share
Share via:
BR

Posted Mar 22, 2021 at 08:37am
Sending our love, thoughts and prayers as you lay our sweet grandpa builder to rest this week. Much love, Kurtis, Andrea, Dex and Myka

Posted Mar 21, 2021 at 12:03pm
My deepest sympathy to all your family. Bill and Doreen were a family favourite couple. They both travelled a long and loving road.
Angela Duczek.
Comment Share
Share via:
HM

Posted Mar 21, 2021 at 12:11am
To all of Bill's family I send my deepest condolences. It is hard to have our loved ones leave us but it is also a comfort to know that they have lived a good and long life and are now together with loved ones that have gone before. "Uncle Willy" was a special man and I enjoyed the years we worked together at the hospital. His sense of humor and his "thriftyness" were always priceless. Now "Uncle Willy and Aunt Maggie" are together again. May you both rest in peace. Heather McEwen
Comment Share
Share via: 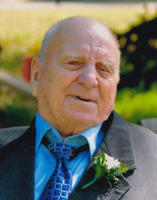