To share your memory on the wall of Malina Benna, sign in using one of the following options:


Melina Benna of Whitewood, SK, age 91 years, passed away peacefully Tuesday, March 2, 2021. She was born near Lestock, SK, on January 20, 1930. Melina was the eighth of nine children. Her parents, John and Elizabeth Berkes, immigrated to Canada from Hungary in 1924 and raised their children on the beautiful Saskatchewan prairie.

Melina married Andrew Benna on October 4, 1948; their first years of marriage were spent farming in the Qu’Appelle Valley with Andrew’s parents. During this time, Mel gave birth to two daughters, Dianne Ann and Debra Elizabeth. In 1954 Andrew left for British Columbia to work in the logging industry. Melina would follow shortly after, travelling across the prairies by train with Dianne, age two years, and Debbie, only five months old. The couple resided in Ashcroft, BC, and there Melina and Andrew welcomed their third daughter, Darlene Ann. In the summer of 1959, Melina, Andrew and their three girls returned to Saskatchewan and settled in Whitewood, later welcoming another daughter Delilah Donna in 1969. Andrew passed away suddenly in early 1970 due to terminal cancer, and Melina was left on her own to raise her four girls aged 17, 15, 11 and seven months.

Melina worked hard to support her family; she had a work ethic rivalled by few and took pride in any job to which she set her hand. Throughout the years, she worked at the local general store, then called the Solo store. Later she was employed at the Whitewood Hotel as a waitress and bartender, eventually becoming the manager. When the Whitewood and District Care Home opened in 1983, Melina became one of its original employees, working in the laundry department. She was always very happy to help and do whatever she could to make the lives of the residents a bit more comfortable. After 12 years of service at the nursing home, Melina retired in 1995.

Melina enjoyed her retirement; she had always been an amazing cook and avid gardener, but retirement afforded her more time to do other things she enjoyed. She loved going for walks, crocheting, quilting, cross stitch, sewing and jigsaw puzzles, and, of course, a couple of her favourite activities were going to the casino and bingo with her family. Above all, enjoying her family took priority; her grandchildren and great-grandchildren owned her heart, and she took every opportunity to build memories with them. Melina had somewhat of a reputation for making the best soups ever! Surely gramburger soup will go down in history.

For the last four years, Melina has resided at the Whitewood and District Care Home. She considered it home and enjoyed the amazing staff and the other residents. She would often describe her caregivers as “her girls”, and she loved and appreciated them beyond measure. The quality of care, love, respect and consideration she and her family received from the staff there was second to none and will never be forgotten.

Our Mom’s focus was always on taking care of her family, no matter what she had to do without to do so. She gave an immeasurable amount of love and support to everyone for whom she cared. There was nothing more important to her than family. Without saying too much, Mom always managed to give the best advice, loads of encouragement, and always let us know she was proud of us. Her love was always unconditional. She proved to us daily throughout our lives that no matter how difficult things got, as long as we worked hard, had each other and remained patient and kind, we could get through anything. Mom was always willing to listen and was the constant that we could count on to share our laughter and our tears. She never failed to help us up when we stumbled and to be the first one cheering when we would succeed. Mom will be remembered with love and admiration but also for her uncanny wit and her ability to incite joy and laughter with a well-timed one-liner. We are confident that Mom left this world knowing that we would be okay, we would carry her with us in our hearts forever, and above all that our love for her has no limits.

Our mom was an incredible woman who taught us so much about love, strength, perseverance and kindness. We know she was loved by many, and with her quiet strength and caring, and her legendary quick wit, touched many lives throughout her own. It is because of this that we take great comfort in knowing our mom will live on in many hearts and memories.

Melina’s family wishes to acknowledge with deep appreciation the many expressions of love, concern and kindness extended to them during this time.

God looked around His garden
And found an empty place
He then looked down upon the earth
And saw your tired face.

He put his arms around you
And lifted you to rest.
God’s garden must be beautiful
He always takes the best.

He saw the road was getting rough
And the hills were hard to climb,
So He closed your weary eyelids
And whispered “Peace be thine”.

It broke our hearts to lose you
But you didn’t go alone,
For part of us went with you
The day God called you home..
Read Less

We encourage you to share your most beloved memories of Malina here, so that the family and other loved ones can always see it. You can upload cherished photographs, or share your favorite stories, and can even comment on those shared by others.

Posted Apr 09, 2021 at 02:02pm
Our hearts go out to your family. Aunt Mal was my godmother. I have many fond memories of her at all the visits made in my younger years. Hugs to all the family.💕💕🙏🏻🙏🏻🙏🏻 Joanne & David McConnell (St Albert, AB)
Comment Share
Share via:
BV

Posted Mar 21, 2021 at 10:15pm
It was a true pleasure to care for your mom, but in many ways she cared for me❤️ I offer my sincere condolences to each of her family members, you were her most prized possessions. What a life she lived, persevered through heartbreak, raised a beautiful family, and met everything head on, no challenge was too big for Mel. My work days were brighter because she was my go-to. I miss her greatly and will always remember her, with love❤️
Comment Share
Share via:
CC

Posted Mar 11, 2021 at 08:24pm
Dear Dianne, Debbie, Darlene, and Delilah (and families),
We are all very sorry at the loss of your mom. Auntie Mel was a remarkable person, a cherished sister to our mom (and dad), and a wonderful auntie to us. We are thankful for our last visit with her the summer before COVID hit. The abundant love she had for all of you, and her extended family, will be her beautiful legacy. Our thoughts are with you all. Love from Candace and Brad Charlton, Sheldon Bakuska, Leonard Bakuska and Ottilie Murray, and Bradley and Hilda Bakuska
Comment Share
Share via:
HM

Posted Mar 06, 2021 at 10:52pm
To Dianne, Deb, Darlene, Delilah and your families- I want to extend my deepest condolences to you all. Your Mom was a great person. She will be missed by all of you but she has left you with happy memories and a strong family bonding. My thoughts and prayers are with you all.
Comment Share
Share via:
SK

Posted Mar 06, 2021 at 06:06pm
Aunt Malina, you may have been a small woman in size but the memory you leave us fills our hearts. You never looked back or felt sorry for yourself. no matter what you faced in life and we can all learn from your example. I remember in 1959, both my Mom and Dad were in hospital and you took us 4 kids for a week. You were pregnant with Darlene and my brother was only 1 year old. A house full of 6 kids and we didn't want to go home as it was more fun at your house. I will cherish your memory always and with greatest sympathy to your family.
Comment Share
Share via: 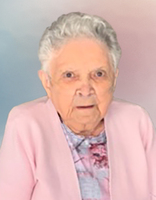 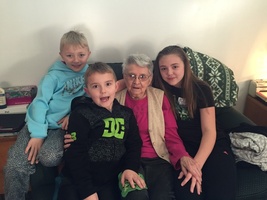 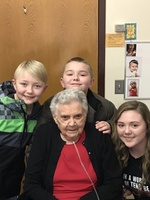 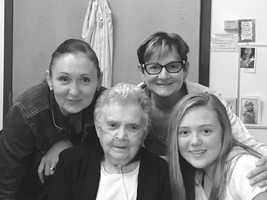