To share your memory on the wall of Adeline Miller, sign in using one of the following options:


Peacefully, surrounded by family, our dear wife, mother and grandmother Adeline Miller entered her eternal home on Saturday, February 27, 2021, at the age of 87 years.

Adeline was born December 9, 1933, on a farm near Duff, Saskatchewan. She was the second of four children born to Fred and Margaret (nee Kraushaar) Schneider. Attending Yola School, she completed Grade 10, and then, in 1954, she married Reinhold Miller. Their first farm was in the Colmer area; in 1961, they moved to another farm near Fenwood. Together they farmed for 46 years and were blessed with three children. Adeline was more than a housewife; she worked side by side with Reinhold on the farm, including seeding and harvest. She also worked at Western Produce, Cameo Cafe and Park Plaza Restaurant. In 2000 they sold their farm and started their retirement in Melville.

In spare time, Adeline enjoyed gardening, sewing, crocheting, cooking and baking. There was always a spread when company came over. After they moved to Melville, there was more time, and they started doing some travelling. Their trips were mostly with family to Vancouver, Toronto, Niagara Falls, Edmonton, Saskatoon, Besnard Lake and Mexico or spending a day at the lake fishing. They enjoyed going for coffee with friends and family.

Adeline was a devoted wife, mother and grandmother who loved spending time with family celebrating birthdays, achievements or just visits with them.

In 2019 she moved to St. Paul Lutheran Home where she was well cared for until her passing.

The family would like to thank Dr. Eshawesh and the staff at St. Paul Lutheran Home (especially Academy Neighbourhood) for their dedicated and loving care.

We bid goodbye to one so loved ... but never to be forgotten. Until we meet again!
Read Less

Donations are being accepted for:
Melville Pentecostal Church Memorial Fund THE GIDEONS INTERNATIONAL IN CANADA

We encourage you to share your most beloved memories of Adeline here, so that the family and other loved ones can always see it. You can upload cherished photographs, or share your favorite stories, and can even comment on those shared by others.

Posted Mar 12, 2021 at 01:23pm
Dear Allen, Lois & Family,
Sincere condolences on your mom's passing. Keeping you and your family in my thoughts and prayers!
Rhonda Bobst
Comment Share
Share via:
GH

Posted Mar 07, 2021 at 11:07am
Uncle Reinhold, Gloria, Dale, Allen and families. I am so saddened that I was not able to be with you all but watched the beautiful service and shared memories
I think back to so many wonderful times over the years, spending summers and holidays in Melville with the entire family! Large family dinners crammed around the table and of course the kids table on the side. Finishing up a large dinner only to eat "lunch" in the early hours of the evening while playing board games. Memories spending time at the farm and watching you milk the cows and of course getting to participate in the bailing chores in fall. I will always remember our story about "dog bite my leg" and how we would laugh and talk about it over all these years. I would also like to share the memory from that hot summer day in 1976 when Allen and I went with you to Yorkton to pick up some parts. The windows were rolled down, the radio playing, and you were singing along to "Here I am Drunk Again". All of a sudden there was a Royal Blue car with flashing lights in the rear view mirror!. The shocked look on all our faces when the officer came to the door and said " do you know how fast you were going"? You told him you were singing along to the song and he asked... which song? He smiled and said Mrs. Miller... slow it down! and let us on our way! We all were in disbelief then started laughing again.
My thoughts and prayers are with you all. I love you Auntie Adeline.
Comment Share
Share via:
LS

Posted Mar 06, 2021 at 08:18pm
The funeral service was beautiful, I am sorry I could not attend! I have Many wonderful memories with Adeline and all your family, I am positive she is in a better place, and Norm will be able to show her around. Take care, all of you!
Lucy
Comment Share
Share via:
ES

Posted Mar 06, 2021 at 04:58pm
Our deepest sympathy to Reinhold and family on the loss of a dear wife, mother and grandma. At this time may your hearts be comforted by the Lord's loving presence, until the day when we will all meet again. Until then hold close all of the wonderful memories you have in your hearts.
Ervin & Lorraine Schindel
Comment Share
Share via: 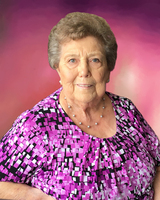 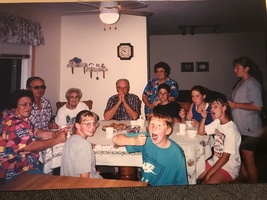