To share your memory on the wall of Olga Weger, sign in using one of the following options:

Olga was one of nine children. She was predeceased by her parents, Joseph and Katherine (Yeadon) Schmidt; her husband, Bill; her siblings, Edward (Winnifred), Ernie (Violet), Walter (Lillian), Evelyn (Johnny) and Gordon (Gladys); and by her daughter Bonnie in 1958.

Mom took her schooling at Neudorf School. Mom and Dad ran a successful farm in the Qu’Appelle Valley for 43 years before they built their retirement home in Melville in 1990. Mom had the ability to balance her time between running the household, assisting on the farm plus always finding plenty of time for her husband and children, church, golf and social activities.

Mom enjoyed cards, bingo, the occasional trip to the casino, some voluntary work at the thrift shop, and coffee with friends and neighbours. In addition, she enjoyed baking homemade bread and many types of desserts which were always available when company dropped by. Mom and Dad had many travel adventures, including spending 12 winters in the southern U.S.A to get away from the cold weather.

We would like to thank the staff at St. Paul Lutheran Home and St. Peter’s Hospital for looking after Mom during the last two months.

Our lives will be much emptier without her but fuller because of her. God blessed us because Olga was in our lives. She will be very missed.
Read Less

We encourage you to share your most beloved memories of Olga here, so that the family and other loved ones can always see it. You can upload cherished photographs, or share your favorite stories, and can even comment on those shared by others.

Posted Mar 07, 2021 at 02:14pm
How do you thank someone for not only giving you life but filling your life with many happy memories. We were so lucky to have parents who really cared and loved us and taught us many things to cope with life. Even after leaving the farm and moving to other places so visiting was not always possible, I could just phone and have a good chat. Love you mom.
Comment Share
Share via:
OM

Posted Feb 26, 2021 at 12:11pm
Aunt Olga and her lovely smile will be sadly missed. She was a "trooper" ...very kind, caring, humble and talented (gardening, cooking, travelling, taking care of her family). She always had a cheerful, accepting disposition even through many challenges and hardships. We loved to visit on the farm (where many lessons were learned / taught by Bill and Olga 50-70 years ago), down in Mesa (30 years ago) and in Melville (over the many recent years). We had so many wonderful celebrations (weddings, anniversaries, and yes, funerals) with the Schmidt and Weger families. Along with your family, Aunt Clara, Aunt Marjorie and Aunt Adeline will truly miss "sister Olga" but they are comforted knowing she is in God's hands. It's a hard time, but like our other family members who have gone before Olga, we will follow her path here and "do our best" in this journey. Our sincere sympathies to Darlene, Wayne, Garth, and Kelly and all of your families. Take Care and God Bless. The Youck Family from Saskatoon, Devon, and Lloydminster
Comment Share
Share via:
SY

Posted Feb 23, 2021 at 10:26am
Darlene, Roger, Wayne, Janice, Garth, Kelly Cathy and family, Our thoughts are with you! We are missing a very special Lady!

Posted Feb 22, 2021 at 03:18pm
Condolences to Darlene, Wayne, Garth and Kelly and their families. Cherish your memories. The family farm was one of my favorite places to visit due to the kindness of Aunt Olga and Uncle Bill. My best memories were watching the cows being milked by a machine, the pool table, race car track, the doll house, watching slides and going for a motorcycle ride. The pool table was a rivalry between me, Garth and I remember Dave a few times with Garth being victorious because he got to practice more. Lots of good memories.
Comment Share
Share via: 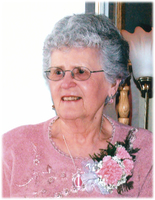