To share your memory on the wall of Rick Hyatt, sign in using one of the following options:


It is with great sadness we announce the sudden passing of our brother, Calhoun Broderick Randall Hyatt (Rick).

Rick was born April 27, 1959, in Whitehorse, Yukon, and was the eldest of five children born to Eileen and Randall Hyatt. He was raised in a military family and moved four times until is father was stationed at his last posting at CFS Yorkton (Whitespruce) when Rick was eight years old. Being raised military, Rick was inspired to join air cadets and then later served a brief period of time in the militia before health issues forced him on another path. He later began a career as a chef and finally settled as a professional driver working for Regina Cabs for 10 years, Watrous Taxi, eventually starting his own private taxi service in Rosetown, SK. While living in Regina, Rick also worked part-time for Regina Cable service and for several years entertained many kids at the Cornwall Centre playing Santa Claus.

Rick never had a family of his own but devoted his life to assisting his parents as they aged and being an uncle to his nieces and nephews. He relocated to Killaly in 2016 with his mother and brother, where they were cared for by his sister Julie until his passing.

Rick was a kind soul who was best known for assisting anyone who needed his help. He went out of his way for those who needed it even if it meant he went without. Many knew him as a “big-hearted, good man, generous, giving, nice and a great friend”. We knew him as a wonderful brother and son who always had a yarn to spin, some teasing to dish out, was a bit of a joker and always tried hard to be there whenever we needed him. We lovingly nicknamed him “Mr. SGI” because he was famous for calling us on our birthdays to send good wishes but also to remind us to renew our license after a couple of his sisters (and brother-in-law) made the mistake of forgetting to do that many years ago.

Rick was predeceased by his parents, Eileen and Randall Hyatt. He leaves to mourn his passing: his sisters, Cheryl (Holland) Tolkien, Cindy (Paul) Cerniuk and Julie (Richard) Armbruster; his dear brother, Bradley Hyatt; his three nephews, Lee (Crystal) Hyatt, Ken (Ashleigh) Hyatt and Evan Hyatt; and his two nieces, Rose and Diane Cerniuk. He will be forever missed.
Read Less

We encourage you to share your most beloved memories of Rick here, so that the family and other loved ones can always see it. You can upload cherished photographs, or share your favorite stories, and can even comment on those shared by others. 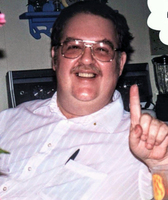