To share your memory on the wall of Don Herman, sign in using one of the following options:


It is with great sadness that we announce the passing of Mervin (Donald) Herman, beloved husband of Irene Herman of Melville, SK. He passed away peacefully with his family by his side at St. Paul Lutheran Home, Melville, on Thursday, January 21, 2021.

Don was born on the family homestead near the Duff area on November 24, 1931, and received his education at Duff school. Don was confirmed at the Evangelical Lutheran Church on June 2, 1946. He met the love of his life, Irene Daunheimer, and they united in marriage on October 25, 1956. Together they had three daughters, Gloria, Mardell and Joy.

In 1964 Don started his life career at the Co-op in Fenwood and was later transferred to Melville. He proudly served the community until he retired in 1991. Don was a faithful church member who loved the Lord. He served and held many positions at Zion Lutheran Church including secretary, financial secretary, usher, elder and trustee. Don was a member and proud supporter of the Melville Senior Centre and was honoured to have served as their president. He will also be remembered as a loving and caring father and husband.

Don enjoyed farming, bowling, dancing, playing cards, gardening, baseball, curling, having coffee with his buddies and telling a good joke but most of all, spending time with his family. He would often tell us that we made him happy twice, “once when we come and once when we go”.

“ You have made a lasting impression forever in our hearts.” Love you forever and always, Dad, Grandpa and Great-Grandpa XOXO
Read Less

Donations are being accepted for: Zion Lutheran Church Memorial Fund.

We encourage you to share your most beloved memories of Don Herman here, so that the family and other loved ones can always see it. You can upload cherished photographs, or share your favorite stories, and can even comment on those shared by others.

Posted Jan 31, 2021 at 10:57pm
My very deepest sympathies to you Irene, Gloria, Mardell, Joy and all of the family. Such a sad loss for all of you. Don was an amazing man. I enjoyed his company so much and he always had a warm hug for me whenever I saw him. He will be sorely missed by me and everyone that knew him. Rest peacefully dear Don and always watch over your family XO
Comment Share
Share via:
DB

Posted Jan 31, 2021 at 09:45am
My deepest sympathies are with the all the family. I will always remember his laugh, his great sense of humor, and the fun times together at birthdays and Christmas. Sending hugs and praying for comfort during this difficult time.
Comment Share
Share via:
LB

Posted Jan 29, 2021 at 11:35am
Uncle Don was a wonderful, gentle man who always wore a smile. I enjoyed spending time with him playing cards and shuffleboard and at Christmas playing the bean bag toss game. He will be missed as he was loved so greatly. May our memories bring comfort and peace and know that one day we will be together again. Love, thoughts and prayers to the family.
Comment Share
Share via:
RP

Posted Jan 29, 2021 at 10:27am
To Irene, Gloria, Mardell and Joy, grandchildren and great grand children. What a blessed life Don has enjoyed He is remembered as a kind, gentle and patient man. Please take comfort in your memories and know that many friends and family will miss your Dad. Irene wishing you comfort and reassurance that you were greatly loved.
Ray Pekrul and Lynda Kushnir Pekrul
Comment Share
Share via:
L

Posted Jan 28, 2021 at 08:23pm
Deepest sympathies to the Herman family on this great loss. Mr Herman was a wonderful man, quiet and witty. I’m sure he cringed every time this very loud person came around. He knew it often led to me leading his oldest daughter astray He had a great chuckle and will be missed by many. I know my dad and Don will be arranging heavenly shuffle board tournaments.
May God give strength to you all during this difficult time. ❤️🙏❤️
Comment Share
Share via: 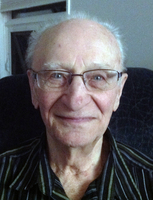