To share your memory on the wall of Marilyn Gray, sign in using one of the following options:

Marilyn Edith Gray (nee Dean), aged 63 years, late of Melville, SK, and formerly of Invermay, SK, passed away peacefully in her home with her family surrounding her on Sunday, November 29, 2020.

Marilyn was born in Invermay, SK, on May 3, 1957, to David and Doreen (nee Story) Dean. She was the fourth of five children. Marilyn was raised on the family farm located between Invermay and Rama. She could usually be found with her nose in a book, as she loved to read.

Marilyn graduated from Invermay High School in 1975 and went on to begin her career at the local Royal Bank in Invermay. During this time, she met her soul mate (who was also a friend of the family), John Gray. They were married on June 14, 1980. Out of this union came two beautiful daughters, Melissa in 1981, when Marilyn took a leave of absence from the bank, remaining off work, as Deanna arrived 18 months later in 1982. After some time off to look after the girls, Marilyn returned to work. She took a position at the Invermay Gateway Lodge, where she remained for the next 17 years. After both girls graduated from high school, Marilyn and John decided to move to Fox Warren, MB, for employment for John. They returned to Invermay in 2001 for a brief stay before moving to Melville, SK, in 2002, where Marilyn gained employment at a publishing plant and later the local newspaper.

Family was always an important part of Marilyn’s life, and that became more evident once the girls found companions, and grandchildren started to arrive. She enjoyed spending any time she could with them. That was made easier for her once both girls decided to make Melville their home as well. Marilyn spoke proudly of them to everyone she met. She also had a quick wit and could always recite a joke or two to make you laugh.

Marilyn’s health started failing, which led her to take an early retirement. After several years in Melville, she deteriorated enough that she had to become a resident of the St. Paul Lutheran Care Home in Melville.

In October of 2020, Marilyn went to Regina for what was to be a routine knee surgery and did well for the first few days. However, with other underlying complex health conditions and other complications, she fell seriously ill and could not recover. The family brought her home to her house on Wednesday, November 25, 2020, to care for and spend time with her until such time that she passed. All Marilyn ever wanted since moving to the nursing home was to return to her own home.

Marilyn was predeceased by her parents, David and Doreen Dean; her mother-in-law and father-in-law, Jack and Hazel Gray; sister-in-law Diane Anaka; maternal and paternal grandparents, several aunts, uncles and cousins. She leaves to mourn and cherish her memory: her loving husband, John Gray; her daughter, Melissa (Curtis) Manum and their children, Archur, Jagur and Adlur; her daughter, Deanna Gray (Matthew Hollinger) and their children, Lecina, Alana and Austin; brothers Brian Dean of Canora Beach, Richard (Irene) Dean of Invermay and Calvin (Barb) Dean of Taber, AB; sister Valerie (Lloyd) Schmidt of Melville; brothers- and sisters-in-law Ed Anaka, Jacquie (Ray) Puryk, Darlene Gray, Barb (Don) Puryk, Garry Gray and Darcy Gray; and numerous nieces and nephews. A special thank you to the staff at St. Paul Lutheran Home for the care she received the last two and a half years. Her warm hugs and smile will be missed by one and all.

A celebration of life will take place at a later date.

In lieu of flowers, donations may be made to the Canadian Mental Health Association or the St. Paul Lutheran Home Foundation, Melville, SK.

We encourage you to share your most beloved memories of Marilyn here, so that the family and other loved ones can always see it. You can upload cherished photographs, or share your favorite stories, and can even comment on those shared by others.

Posted Dec 14, 2020 at 07:46pm
Our deepest sympathies John and family(ies). Find strength in your memories of Marilyn and in each other at this most difficult time.
Comment Share
Share via:

Posted Dec 03, 2020 at 12:45pm
Brian, Richard ,Kelly and Valerie,
We are all very sorry to hear of the passing of Marilyn. It is so difficult to lose a loved one, but I know you will find strength in each other as you always have and may me memories of Marilyn bring you comfort.

God Bless you and your families.

Take Care of each other, 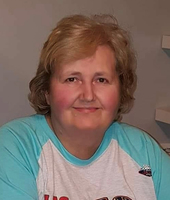