To share your memory on the wall of Elizabeth Kullman, sign in using one of the following options:

Print
We are saddened but not surprised by the sudden passing of our dear sister and aunt, Elizabeth Helen Kullman, on Monday, September 21, 2020.

Elizabeth was born Monday, July 31, 1922, the third child of Jack and Laura Kullman of Melville,... Read More
We are saddened but not surprised by the sudden passing of our dear sister and aunt, Elizabeth Helen Kullman, on Monday, September 21, 2020.

Elizabeth was born Monday, July 31, 1922, the third child of Jack and Laura Kullman of Melville, SK. She will be deeply missed by her sister, Dorothy Knight; her brother-in-law, Richard Dale; nieces and nephews Cheryl, Rodney (Eugenie), Gail, Barbara (Dave), Lynn, Doug (Penny), Jim (Ann), Debbie, John (Ann), Joanne (Terry), and their families; cousins Elsie Pederson, Gloria Ritter, Ruth Anderson, Wally and Margreta Gilpin, Don and Vangy Whittmire, and their families; her dear friends, Doreen and Ferd Hack, Olga Besler and the members of St. Paul’s Lutheran Church, where she, at 98 years of age, was the eldest lifetime member at the time of her passing; her neighbour and special caregiver, Tina Latrace and her family; and those who knew and loved her.

The house on 3rd Avenue in Melville was the centre of most family gatherings. Keeping a family of eight children who lived from British Columbia to Newfoundland in close contact was very important to her parents, and Elizabeth continued to open the house to all over the years, especially her siblings and our beloved Aunt Kay, who came to stay and visit. She was predeceased by brothers and sisters Karl, Rudy, George, Harold, Eleanor and Walter, and recently by brother-in-law Wally Knight.

Elizabeth loved to read and excelled at mathematics. She worked at the post office in Melville after finishing high school, and then on she went to Western Produce as bookkeeper in their office for many years, which she enjoyed immensely. However, she longed to become a nurse, and at age 43, moved to Toronto to attend Quo Vadis School for mature students. As an RN, she returned to St. Peter’s Hospital in 1967, later becoming DOC at St. Paul Lutheran Home, where she worked until her retirement in 1987. Genuine caring and dignity for the elderly were very important to Elizabeth - compassion, dedication, kindness, communication, cleanliness and excellence in care for the residents was expected, and she encouraged her staff to give their best.

Elizabeth was a hard worker and took pride in serving her church and her community. She enjoyed cake decorating, baking and recipe books. Elizabeth liked to be in touch with current events and happenings in Canada and around the world. She enjoyed travelling and felt fortunate to have seen many countries and most of Canada.

Elizabeth will be remembered for her independent spirit, her belief in the value of education, her generosity and her unfailing interest in her family and always made a point of asking what her great-nieces and -nephews were doing.
Read Less

We encourage you to share your most beloved memories of Elizabeth here, so that the family and other loved ones can always see it. You can upload cherished photographs, or share your favorite stories, and can even comment on those shared by others.

Posted Nov 26, 2020 at 12:59am
Deepest sympathy to the family of Elizabeth Kullman from Alice Greenaway (nee Haas) and Gail Young (nee Greenaway). I (Gail) have faded memories of meeting the Kullman's as a child in Melville when visiting my Grandparents, George and Lena Haas (4th Avenue). Alice grew up in Melville and now lives in Ontario, and more recently connected with Elizabeth. She enjoyed their telephone conversations, and connecting with someone from her past in Melville. Alice learned from Elizabeth that her parents were godparents to Elizabeth so there was another connection. Alice was recently hospitalized and after she was released tried to reconnect with Elizabeth by phone. She is greatly saddened by the loss of this connection to her past. We send our deepest sympathy to family members.
Comment Share
Share via:
PK

Posted Oct 08, 2020 at 01:45pm
Elizabeth was a very strong woman, and will be missed, I wasn't able to go see her since march and I missed our visits and talking about how things have changed in her life, she adjusted to what life dealt her like the trouper she was, may she rest in peace. Phyllis Keller
Comment Share
Share via: 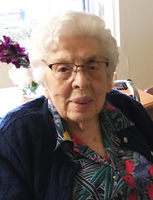